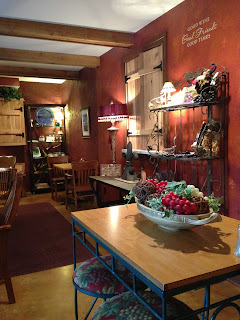 One stop on the Scenic Weeping Water Valley Trail is Slattery Vintage Estates. At the end of a rolling road in rural Cass County, the vineyard and tasting room is a Saturday night dinner date, a weekend retreat, or an afternoon tasting the best of Nebraska. It is hard to pin down exactly what it is because it is continually evolving but you can bet it is a good time.

Barb and Mike Slattery bought the land when they retired and planted the vineyard. They both came from families with farming roots and fondly hoped to be able to retire on a little plot of land in the country. Initially, they planned a bed and breakfast in the vineyard setting. Then they opened a tasting room and restaurant. They added live music on Saturday nights. Their most recent addition is four “bungalows” that are somewhere between a tent and an antique bedroom. Soon, they will even be bottling some of their own wine.

The wine industry has come a long way since the 1976 “Judgement of Paris” when California wines – Stag’s Leap Wine Cellars in the red category and Chateau Montelena in the white category – won over French wines at the Paris Wine Tasting. Since then, new world wines – those from the US, Latin America and Australia – have come to dominate the wine market. This is driven in part by an increase in wine consumption in the US.** As wine consumption has increased so have the number of vineyards and wine makers. In 2012, 41 states reported taxable production to the Alcohol and Tabacco Tax and Trade Bureau and a total of 651.1 million gallons of still and sparkling wine was bottled.* Almost any state that could call itself an “agricultural” state now has a wine industry. I attribute this to the growing interest in local foods.

A part of the local food movement is an interest in where and how your food is grown. Farms that participate in community supported agriculture programs often encourage their members to come out and watch the cucumbers grow. When we lived in Illinois, we were members of Triple S Farms in Stewardson, Illinois. They have an annual “visit the farm day” and send monthly emails to members detailing what they have in stock and what is happening with the cows, pigs and chickens out on the prairie. Grapes are considerably more picturesque than pigs, even naturally raised pigs, so when you visit a vineyard, you might want to hang around a little longer.

That is what the Slatterys are hoping for. In their tasting room, they focus on Nebraska made wines and are eager to explain the nuances of grape growing in Nebraska. They have learned their technique from the foremost grape growers in Nebraska, Dr. Paul Read and Steve Gamet, who currently head the viticulture program at the University of Nebraska Lincoln. Dr. Read and Mr. Gamet have been instrumental in developing, testing and promoting grape varieties that grow well in Nebraska. The Slatterys and other vineyards have benefited from this research. They are members of the Nebraska Winery and Grape Growers Association and are active in the annual winery and grape growing conference held each year to support wine makers and growers of the Northern hybrid grapes.

“I’m proud of Nebraska wines now. At first it was touch and go. But now!” Barb said. “People that come in and say, ‘oh, Nebraska wines,’ I’ll say, ‘I’ll challenge you. I’ll show you some that you will like. Even if you’re from California or Washington, we can find some that you’ll like.’” Perhaps it is time for a Judgment of California.