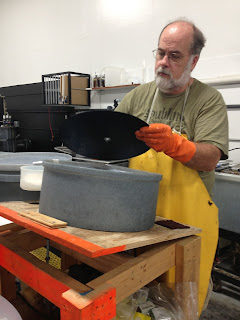 In a cluttered office, Chad Kassem, owner of Quality Record Pressings (and Acoustic Sounds, Analogue Productions and several other vinyl-related businesses), said to me, “Sit here,” pointing to his own chair. As I watched him load one of his reissues of a Shelby Lynne record onto the player he commanded, “No, face the speakers.” As the music began, I instinctively glanced around for Shelby Lynne herself – her voice was so clear and immediate. I likened the experience to the first time I put on glasses. “I didn’t know you were supposed to see this well!” I exclaimed to my mother.

At home, we play old records. By “old,” I mean the type you pick up at a garage sale or thrift store. I enjoy the round, mellow sound of vinyl but I never imagined how much of the sound I was missing. Analogue Productions has reissued many old favorites from the Doors to Nat “King” Cole to Elvis Presley, and even some relative newbies like Norah Jones. Chad started Quality Record Pressings because his small company, Analogue Productions was dropping to the back of the line at record pressing companies as records have become a popular way to release albums at large record labels. For a vinyl-o-phile like Chad, the only option for pressing his own records was to make the best pressings possible. They now not only press their own reissues and the artists they produce, they also press records for almost every major label out there. They have been featured on NPR and in the New York Times with awed confusion. What is the best record pressing company doing in rural Kansas?

It is what I call historical accident. There is no reason that the company is here except that it is where Chad moved in 1984 from Lafayette, Louisiana. He did not move to start a business, or for some spectacular incentive package, but, “to get sober.” He started buying and reselling records. As he expanded he moved from his apartment, to a house, to a commercial space. Then he started adding more businesses to his portfolio. He reissued vinyl albums. Then he produced his own artists, such as legends like Honeyboy Edwards and Weepin’ Willie as well as young blues artists like Noah Wotherspoon and Marquise Knox in his Blue Heaven Studios, a renovated church down the road from Chad’s offices. His most recent addition has been Quality Record Pressings (QRP).

“You can say it’s in the middle of nowhere or you can say it’s in the middle of everywhere.” Chad said about Salina Kansas. Perhaps that was his pitch to Gary Salstrom (pictured above inspecting a master after the initial bath). Gary left RTI in Southern California to join Kassem and manage QRP. He takes the master through the plating process to produce the stampers. The stampers are then used in the room next door to stamp the records using vintage record presses (new record presses have not been produced since the early 1980s). The presses have been re-engineered and include electronic sensors to gauge temperature so that the operator now has even higher quality control of the record. The records are tested for quality and the ones that do not meet the exacting standards are recycled.

Chad brought in Gary to manage the plant but the people who operate the machines are not specially trained in record making. Many have backgrounds in HVAC systems and are comfortable with the types of operations that record machines perform. The re-engineering of the machines was also done locally. The innovation happening “in the middle of everywhere,” is a combination of Chad’s vision, Gary’s expertise and about 50 employees who were able to adapt to a “new” product. Would it be possible for this company to exist anywhere?

Probably not. Chad is committed to Salina because of his employees and his daughter. He likes the quality of the workforce and the quality of the schools. Though he speaks longingly of Southern Louisiana, he seems disinclined to move his family and employees down there despite its well-established blues music industry. “You meet a child here and they are very educated and very smart and very well spoken, you know….This is a good place to raise children, I think….The schools are better. It’s a big plus.” When I look at a company like Chad’s suite of businesses and listen to his story, I see the future of rural America. It is not a call center or an auto plant or a distribution center that will save Small Town, USA. It is the guy out of rehab that has a passion for records.

Posted by Katherine Nesse at 11:12 AM